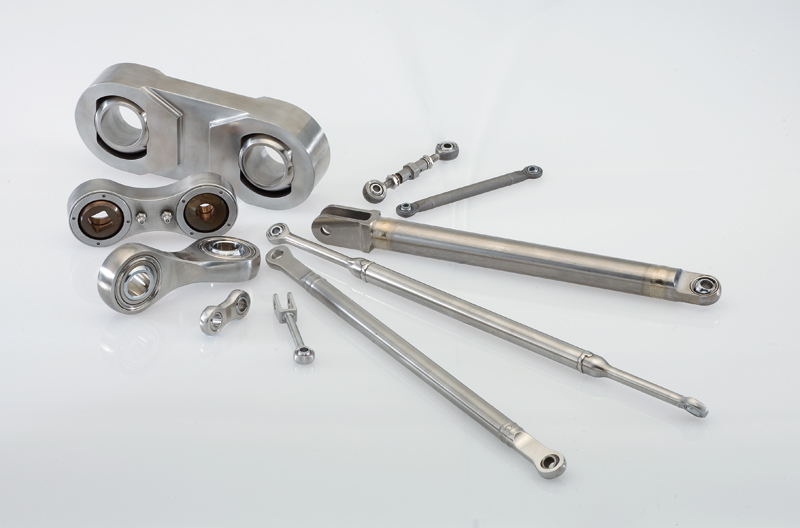 A customer recently approached Astro for help in solving a bearing wear problem in an existing application. A link assembly was wearing out long before its rated life and well within the warranty period. With hundreds of engines in service, and each containing a set of six links, replacement costs were mounting. The customer was desperate to solve the problem quickly and economically.

The links fasten an auxiliary device to a larger assembly within the hot zone of a jet engine, holding the assembly firmly in place while bearing a vibratory load and only slight oscillatory motion. “Longer life was an important objective,” said Brandyn Lewis, the applications engineer who worked on the project. “But the customer was also looking for a cost-effective retrofit solution.”

The original product consisted of two rod ends containing loader slot bearings welded to a hollow tube. The original design was engineered to meet the tribological standards for extreme operating temperatures. All of the components were manufactured from high-temperature alloys and, due to the temperature limitations of self-lubricating liner systems, the bearing was specified for metal-to-metal contact.

During routine maintenance checks performed by the end users of the product, the bearings exhibited excessive wear of the ball and the raceway. The ball was rubbing through the raceway’s hard coating and wearing away the rod end body from the inside. “This abnormal wear condition was happening so fast, the customer had to replace the links under warranty at least twice during the rated life of the parts,” said Brandyn.

When Brandyn and Paul O’Brien, Astro’s manager of applications engineering, reviewed the specifications, they concluded that the original design met all of the customer’s requirements except for one. “According to our calculations, the loader slot bearing was not large enough and, therefore, did not have enough load-carrying capacity,” said Brandyn.

While in the original design size was the major flaw, merely enlarging the loader slot bearing was not a workable solution. This approach would have required the customer to redesign all twelve mounting brackets and retrofit them on every engine currently in service. The customer stipulated that the new design had to fit within the existing brackets, which meant that all the rod ends had to have the same dimensions as before but with increased load capacity. This decision necessitated a move away from the loader slot toward a "full wrap" spherical bearing.

Given the link's temperature specification, the most logical choice appeared to be a split-race, metal-to-metal design, but Brandyn and Paul were not satisfied with this option. "We felt that a high-temperature PTFE liner system was the best solution because of its superior wear characteristics," said Brandyn. "To specify a liner system, though, the actual temperature near the assembly had to be below 625˚ F.”

Brandyn and Paul studied the drawings of the larger assembly to assess the feasibility of their idea. “When we inspected the schematics, we noticed several oil lines intersecting the area where the bearings were located," said Brandyn. "From this observation, we surmised that the actual temperature had to be much lower than specified.”

The customer agreed to verify Brandyn and Paul’s hypothesis. Their engine test data confirmed that the actual temperature near the assembly was low enough to allow the use of a liner system.

Astro's final design is a turnbuckle assembly consisting of three-piece rod ends with lined spherical bearings threaded onto a hollow tube and secured using keys and locking devices. This new design addresses the customer’s need for an economical retrofit, it meets both the application’s size and load requirements, and it is easy to install and maintain. The turnbuckle’s length can be adjusted by twisting the hollow tube, and when the bearings finally wear out, only the rod ends themselves need to be replaced. This should happen less often because the liner system is expected to offer significantly improved life over the original design.

"Thanks to our extensive engineering and manufacturing capabilities, we can evaluate several different bearing designs before making a final recommendation,” said Paul. “In this case, we applied our considerable knowledge of bearing use within aircraft systems to identify a solution that should offer better performance, longer life, and a lower retrofit cost."

The customer has approved the turnbuckle design and is currently running wear tests in their facility to validate performance.