Self-lubricating plain bearings incorporate a liner that includes polytetrafluorethylene (PTFE) on the bearing surface. Selecting the correct bearing liner system requires an analysis of an application's load, temperature, speed of oscillation, and the directional nature of the load. During use, PTFE transfers to the mating ball surface, forming a lubricating film that is continually replaced throughout the life of the liner material.

NHBB uses four basic constructions for PTFE liner systems: laminates, woven materials, metallic-backed composites, and a homogeneous composite material.  The woven materials can be combined with proprietary ball coatings to provide additional performance benefits. Each PTFE liner system (except the DU®,which is mechanically retained) is bonded to the race surface. During use, PTFE transfers to the mating ball surface, forming a lubricating film that is continually replaced throughout the life of the liner material.

Metallic-backed composites consist of a steel backing, a porous bronze inner structure, and a PTFE and lead overlay. In addition to using bonding techniques, this liner type can also be mechanically retained.

Woven materials consist of PTFE threads interwoven with high strength fillers such as nylon, Polyester or fiberglass threads. The majority of the PTFE threads are on the bearing surface while the high-strength filler material supports the PTFE and acts as a bonding surface. As with laminates, the adhesive agent is a thermosetting phenolic.

NHBB's homogeneous formulation, which is the basis for the Oscimax® brand of self-lubricating technology, consists of a proprietary matrix of thermosetting polymeric resins, PTFE, and various other compounds. Testing of this advanced formulation has demonstrated a performance breakthrough in self-lubricating liner technology. The liner coating is fully machinable from surface to substrate using conventional drilling, honing, milling, reaming, and turning techniques, enabling customers to achieve exact tolerances, better fits, and superior performance of the bearing assembly.
​​​​​​​

Surface finish and hardness for the surfaces running against a PTFE liner are important for maximum liner life, whether on the shaft, ball, or other running surface.

For maximum life, NHBB recommends a finish of 8 Ra maximum, achieved by lapping, buffing, or honing after grinding. Anything higher than 8 Ra will reduce life.

Hardness should be Rc50 minimum. As hardness drops below Rc50, the mating surface begins to wear.
​​​​​​​

The standard method for checking no-load rotational breakaway torque is described in Military Specification AS81820. The procedure is to hand-rotate the ball to initiate movement. Then the race is locked on a torque meter. The outer race is held in such a manner as to minimize bearing distortion and the resultant effect on the bearing preload. Torque is gradually applied to the ball. The torque required to start the ball moving is then recorded.

NHBB uses the same method to check torque, except that the ball is locked on the torque meter and the race is rotated.

Breaking the ball free from the race before checking torque is very important. Because of preload between the ball and race, the liner, under compression, slowly conforms to the microscopic surface irregularities of the ball. To initiate rotation after a period of time, all of the microscopic liner projections into the ball surface must be sheared off. Once this has been accomplished, the torque reverts back to its rated value. All torque testing should be performed with the outer race restrained in such a manner as to minimize bearing distortion and with the resultant effect on the torque reading obtained. Torque readings can vary appreciably as the result of incorrect or excessive clamping, presence of contaminants, excessive speeds and differences in atmospheric conditions.

Rotational Breakaway Torque is the highest value attained just prior to ball movement. The ball should be hand rotated through several revolutions immediately before testing.

Rotational Torque is the value required to maintain 2 rpm rotation of the ball about its centerline.

Misalignment Torque is the value required to move the ball in a mode other than rotation about the bore centerline.
​​​​​​​ 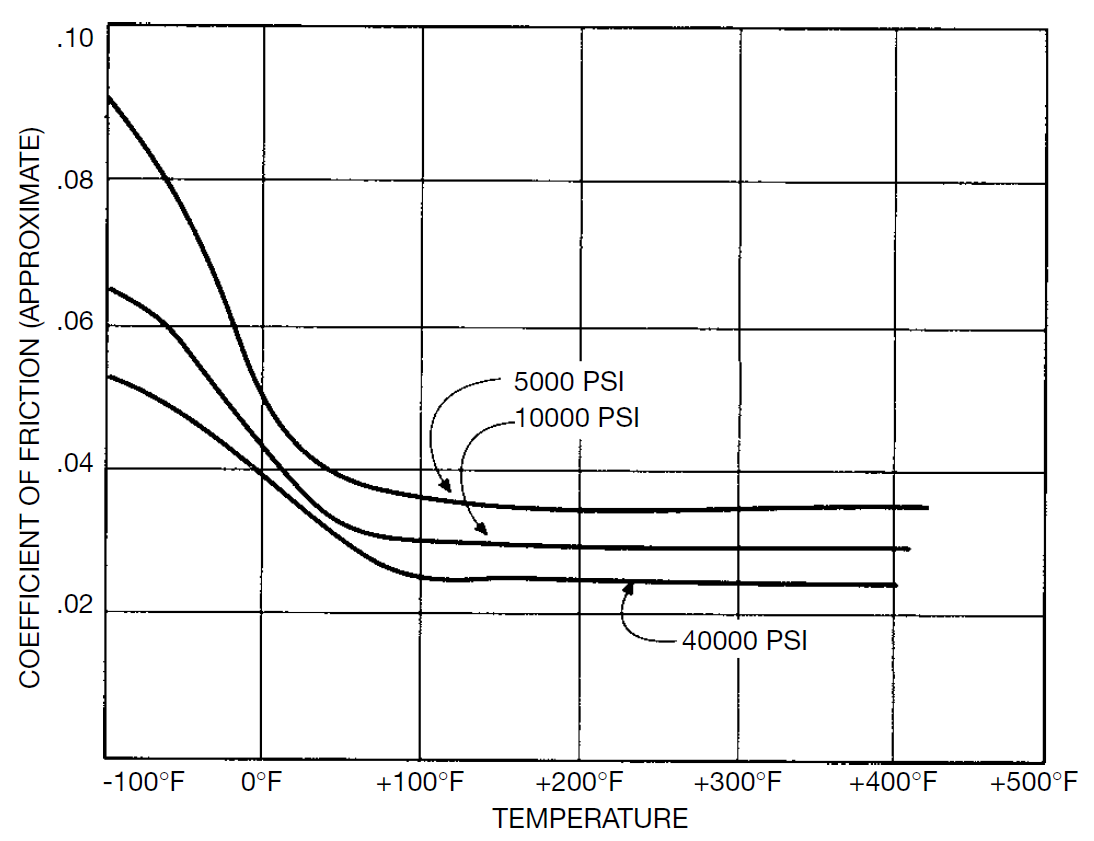 The effect of temperature and load on coefficient of friction.

The prediction of spherical bearing torque is more difficult than that of rolling element bearings. Friction coefficients (see table above) of the sliding surfaces in these bearings vary depending on temperature and load. Torque at various loads is estimated by using the following formula:

Conventional bore measuring equipment such as air gages and inside micrometers will often indicate an apparent oversize condition when used in measuring fabric-lined sleeve bores. Texture and resiliency of the fabric liner, as well as the contact pressure exerted by the gaging instruments all contribute to the probability of obtaining a false reading.

All edges of gage members should have a radius of .03 minimum, and surface finish of the gage should not exceed 8 Ra in order to prevent damage to the fabric when inspecting.

As the table below illustrates, NHBB offers more than a dozen different types of PTFE liner systems in four basic constructions. What follows is a brief description of the most common systems. For more information, please contact NHBB Astro Division's applications engineering department.
​​​​​​​

Please Note: This table does not contain information about three of NHBB's most advanced liner technologies: Oscimax®, INVINSYS®, and Vulkyn®. For information about these solutions, please review the brief descriptions at the bottom of this page, follow the links to the individual landing pages, or contact NHBB.

NHBB’s AD, AK and K liner systems consist of PTFE, flame-resistant fibers, and a thermosetting phenolic resin. The AD, AK and K liners are suitable for many fixed wing aircraft applications, such as actuators, hinges, and control bearings, where oscillation angles vary considerably but at slow oscillation speeds.

The AD, AK and K liners are capable of operating for long durations when exposed to 350°F and short durations up to 500°F.

The D and DD liners were developed to accommodate alternating and reversing loads typically found in rotary wing applications where there are relatively low loading (approximately 2,000 psi) and the speed of oscillation is relatively high (approximately 300 cpm). Typical DD bearing life in a wet, reversing and alternating load test environment is shown below.

NHBB’s HS liner system consists of a PTFE and Polyester Weave coated with a high temperature thermosetting resin. The HS liner has a thickness of .014 (Ref.).

The DU® liner system consists of a low carbon steel sheet coated with a mixture of PTFE, lead, and sintered bronze.  DU® lined bearings can be used in applications up to 550°F, but significant life-reduction factors must be applied.
​​​​​​​

Oscimax® is a uniquely advanced machinable, self-lubricating liner technology developed by NHBB to reduce wear, resist corrosion and moisture, and extend the operating life of bearings and related mechanical assemblies. The patent-pending technology is a homogeneous formulation consisting of a proprietary matrix of thermosetting polymeric resins, PTFE, and various other compounds. Testing of this advanced formulation has demonstrated a performance breakthrough in self-lubricating liner technology.

The development of Oscimax® is ongoing and will evolve to include alternative formulations that offer specific performance characteristics (e.g., low friction), as well as additional applications like an injection-molded self-lubricating liner for spherical bearings. Visit the page devoted to Oscimax® for additional information. 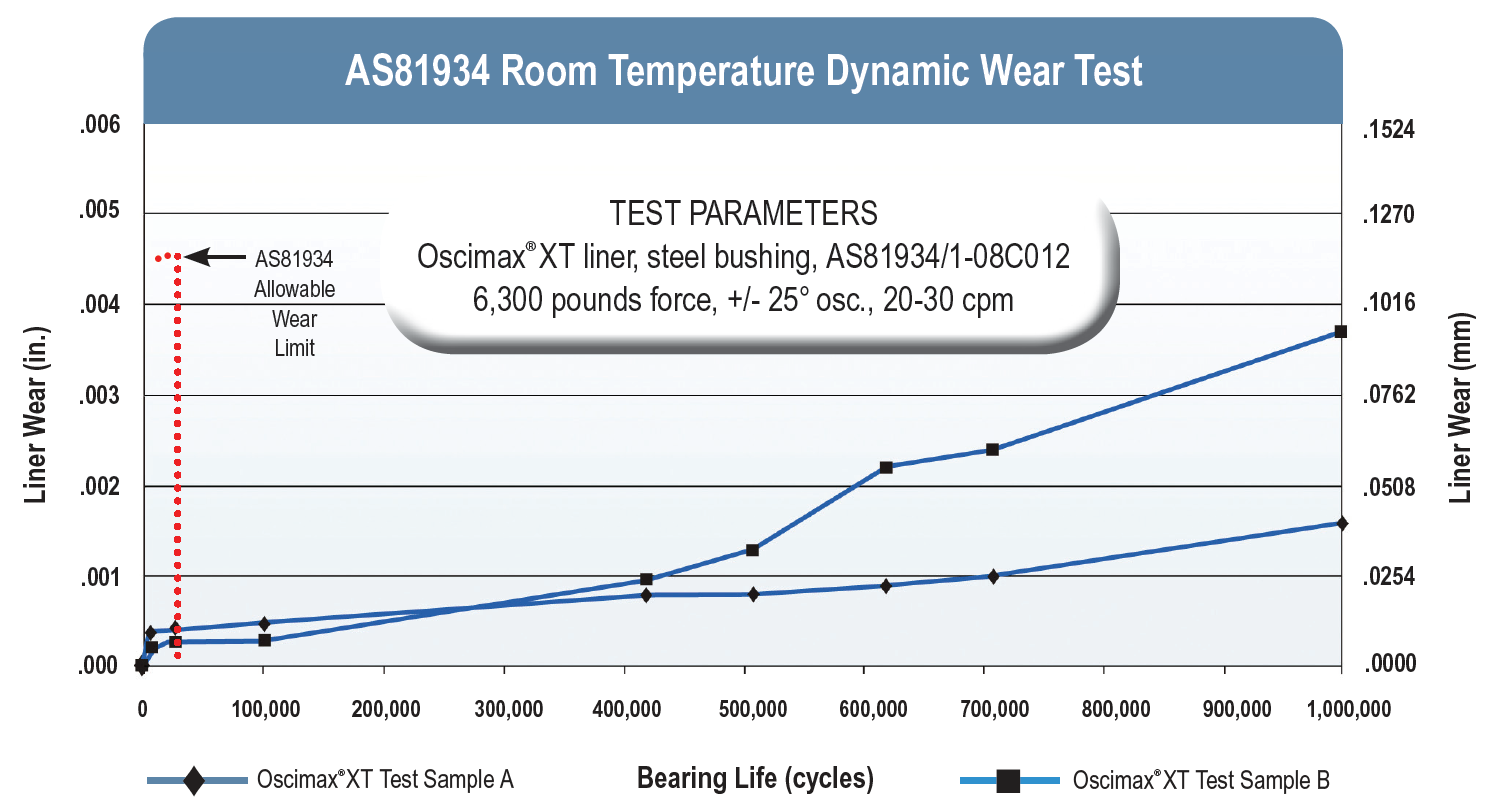 The INVINSYS® bearing system consists of an enhanced self-lubricating liner paired with a specially coated ball that is engineered for superior wear resistance. This proprietary solution lasts up to two and a half times longer than previous designs tested under the same conditions. The significant performance advantage offered by INVINSYS® is helping to reduce maintenance and repair costs of helicopter pitch control systems. Visit the page devoted to INVINSYS® for additional information.

NHBB's Vulkyn® brand of high temperature self-lubricating liner raises the maximum operating temperature of NHBB's high temp. solutions by 75°F. When tested to 700°F, Vulkyn® exhibits 0.006 in. of wear after approximately 150,000 cycles. At 570°F, the cycle count increases to 500,000 before wear reaches 0.006 in. Vulkyn® is also eco-friendly. The compounds in the fabric and bonding agents currently comply with REACH, which is an important benefit to many of NHBB's customers who supply product to European OEM's. Vulkyn® is ideal for both military and commercial aero engine applications in which bearings are exposed to sustained operating temperatures above 350°F. For more information, please contact the Astro Division or your NHBB field sales engineer.

An answer to situations where the performance envelope cannot be covered by metal-to-metal bearings is to consider PTFE lined bearings. Here, the lubricant configuration is such that it functions as the load carrying element of the bearing, as represented by the liner systems currently in use. PTFE bearings may be specified under all or some of the following situations:

While PTFE lined bearings can do an excellent job in many areas, there have been areas of misapplication. Also, there exist some misunderstandings regarding life and failure as applied to hardware of this type. Following are important clarifications concerning these products:

When evaluating the probable service life of a PTFE lined bearing application, there are some factors that do not appear in the PV = K relationship, (seePVFactor). Some considerations for a given application might include:

Cost is not included in the above list since it does not affect the serviceability of any bearing. Higher individual bearing costs may result in a more economical or lower priced finished assembly.
​​​​​​​