When a ball bearing is running under a load, force is transmitted from one bearing ring to the other through the balls. Since the contact area between each ball and the rings is relatively small, moderate loads can produce stresses of tens, even hundreds of thousands of pounds per square inch. These internal stresses have a significant impact on a bearing's life and performance. The internal geometry of a bearing—its radial play, raceway curvature and contact angle—must be carefully chosen so loads will be distributed for optimal performance.

Most ball bearings are assembled so that a slight amount of looseness exists between the balls and the raceways. This looseness is referred to as radial play and axial play. Radial play is the maximum distance that one bearing ring can be displaced with respect to the other in a direction perpendicular to the bearing axis when the bearing is in an unmounted state. Axial Play, or end play, is the maximum relative displacement between the two rings of an unmounted ball bearing in a direction parallel to the bearing axis.

Since radial play and axial play are both consequences of the same degree of looseness between the components, they bear a mutual dependence, yet their values are usually quite different in magnitude. Radial play often varies between .0002 and .0020 in, while axial play may range from .001 to .010 in. The suggested radial play ranges for typical applications should always be consulted when a device is in the initial design phase.

In most ball bearing applications, radial play is functionally more critical than axial play. While radial play has become the standard purchasing specification, you may also specify axial play requirements. Keep in mind, however, the values of radial play and axial play for any given bearing design are mathematically interdependent. Radial play is affected by any interference fit between the shaft and bearing I.D. or between the housing and bearing O.D. Since the important condition is the actual radial play remaining after assembly of the complete device, the radial play specification for the bearing must be modified in accordance with the discussion in the mounting and coding section. 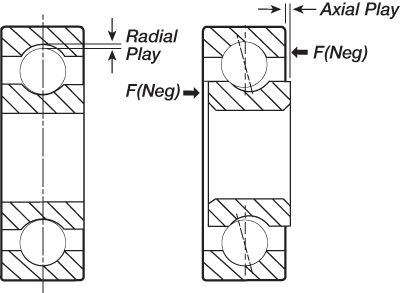 *Measurement in inches.
Non-standard ranges may be specified. 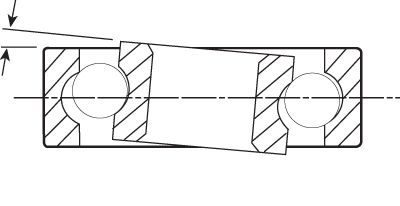 The table of contact angles shown below gives nominal values under no load. 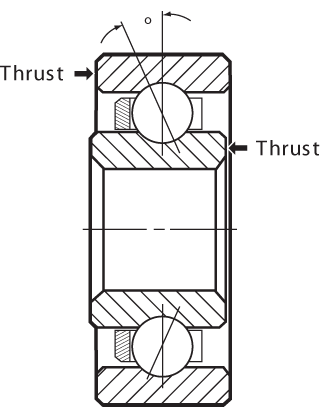 * Expressed as the ratio of race radius to ball diameter.